A year ago, Clubhouse, a voice-based chatroom app, was the hype par excellence; today, activity has dropped off drastically. Its focus on audio was particularly innovative.  So, is audio dead? Podcasts are a trend that has been going on for a long time and even though Clubhouse was a hype that ran out of steam, audio will likely develop more traction in the next few years.

In early 2021, German society was in a strange phase of the pandemic. Lockdowns in daycare centers and schools were extended and the mass use of vaccines was delayed. In the middle of this melange of hoping and waiting came an app that produced a completely unexpected hype: Clubhouse.

It actually sounds quite profane: The Clubhouse app allowed any user to set up a chat room and then talk to anyone who entered the room about any topic. Clubhouse borrowed from many existing social networks. Users could form communities just like on Facebook. Celebrities were close and accessible, just like on Twitter: Oprah, Mark Zuckerberg and even Elon Musk took part in Clubhouse discussions. But most users found the biggest innovation to be that everything happened exclusively via voice – no pictures, no videos, just a voice-based conversation. The fact that the Clubhouse hype died down again after a very short time certainly surprised many – probably most of all those who bought invitations to the app for up to 200 euros on eBay. Clubhouse CEO Paul Davison admitted that the once-hot startup grew ‘way too fast’. Today, Clubhouse ranks only 16th in Apple’s App Store under the “Social Networking” category.

So what was it that caused it to run out of steam so quickly? Was it because audio is not as engaging as videos on YouTube or TikTok? Is there even a future for audio-based business models in this attention economy that keeps throwing its users the next attention grabber? One possible answer is rooted in the use of the smartphone. It is a truism that many people in the Western world could not live without their smartphone. There would probably be more than a few who would rather give up their right to vote than not have access to their cell phone for even a month. On average, German citizens spend between three and four hours a day with their smartphones, although there is obviously a wide range between age groups here. During these three to four hours, let’s stick with this figure, the competition for attention span is enormous: mobile games want to be played, e-mails read, Likes distributed and chat messages written. App developers make it very expensive to capture users’ attention in this short span, so they work with massive advertising budgets, notifications, email reminders, and more.

The power of podcasts for communications

But what happens in the hours when the smartphone screen is not on? Then suddenly there is hardly any competition for the user’s attention – at least not from the cell phone. But that’s exactly when users can be reached much more deeply and for much longer – and that’s where audio plays a significant role, because that’s exactly when audio-based media unfold their full impact. The best example is podcasts: passive consumption in moments when the smartphone display is not on, when jogging, while on the road, before going to bed, when pushing the stroller or walking the dog. Podcasts are very successful in terms of both quantity and quality: around 57 percent of Americans listen to at least one podcast a day. In Germany and the UK, around one in four people regularly listen to podcasts. Podcast listeners are made up of 54% men and 46% women, with the majority (39%) between the ages of 18 and 34. In general, podcast listeners can be characterized as loyal and inquisitive. They listen to popular genres on politics and society (47%), science and technology (38%) and health (36%).  The listeners also have a high acceptance of advertising. Around 87% are open to advertising to be able to receive podcasts free of charge. More than half (54%) of podcast listeners also consider buying a product that was advertised in a podcast.

Podcasts are becoming increasingly popular and the success of audio-based social media show that listening offers are well received. To what extent are these formats already being used in communications for reputation management or CEO positioning?

Not only podcasts, but also the positioning of CEOs as proxies for companies has become increasinglyimportant. CEOs are provided with topics and talking-points by communications departments in order to strengthen the company’s reputation internally (as part of their employee communications) and an externally towards a variety of stakeholders. For this, podcasts provide a new stage: External podcasts (earned media that need to be pitched) as well as internal podcasts, where the company becomes its own media house (owned media).

CISION was asking “What are DAX30 CEOs doing on podcasts”?

If an emerging medium wasn’t being used by CEOs, it would be surprising. And no one need to be surprised, because according CISION’s evaluation, 83 percent of all DAX CEOs have appeared on a podcast at least once. Stefan Oschmann of Merck and Ola Källenius of Daimler used podcasts most frequently. Both were not only guests on external podcasts, but also appeared on podcasts hosted by their companies. 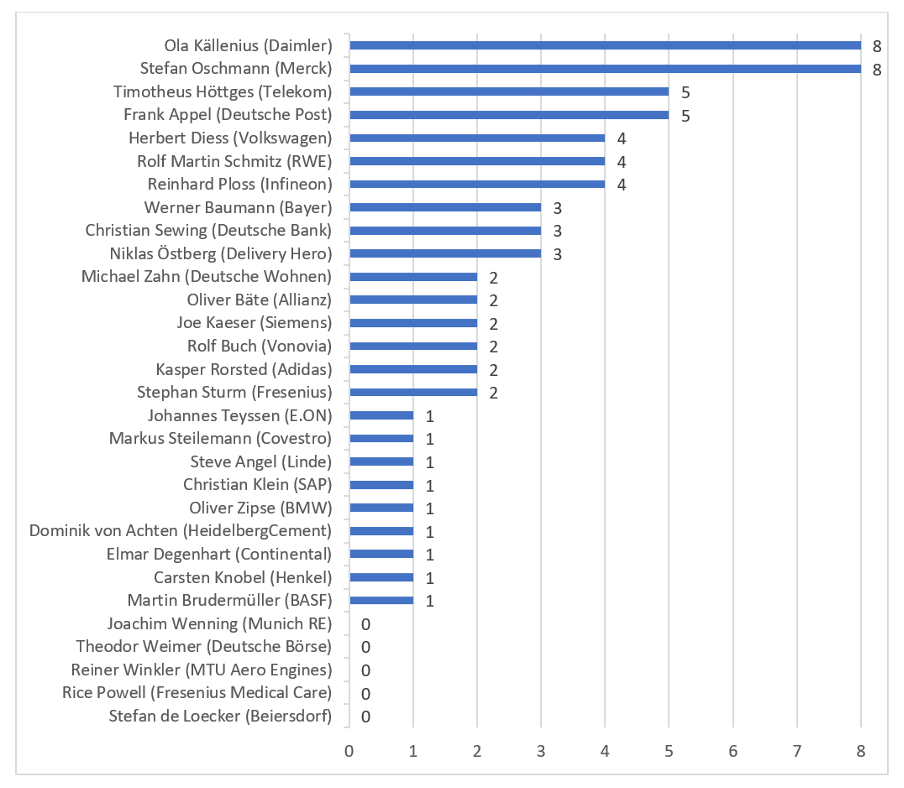 Overall, CEOs of tech, automotive and pharma brands are most fond of podcasts. In line with its popularity and reach, Gabor Steingart’s Morning Briefing is by far the most visited podcast by German CEOs. Twelve of the DAX30 CEOs have been on air, some of them several times. 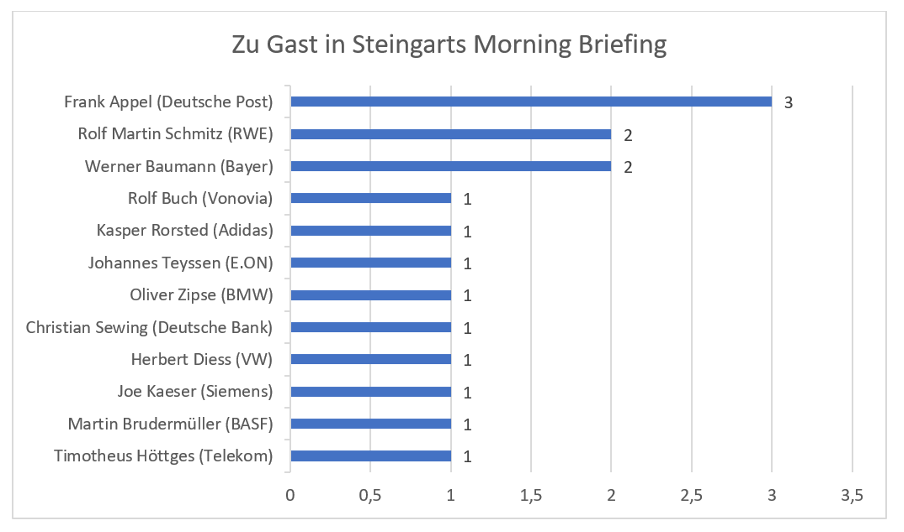 Few CEOs have been guests on company podcasts, although that would be an easy home game. Among them are the “top podcasters” Stefan Oschmann from Merck and Ola Källenius from Daimler. Further, Timotheus Höttges of Telekom, Niklas Östberg of Delivery Hero and Christian Klein of SAP spoke in their own company’s podcasts.

What topics did the CEOs discuss in podcasts?

Frequency is important. But more important are the topics with which the CEOs position themselves in the podcasts – because podcasts offer so much more time which hardly any other medium could offer. In 2020, the topics naturally included COVID-19, about which almost all CEOs spoke about – be it because of the pandemic’s effect on sourcing, production, or new work structures. Other topics that were often in focus in the podcasts were technology and digitalization, e-mobility or else corporate/product strategies. Socio-political topics were also discussed. In general, the majority of CEOs focus on business-related topics and rarely discuss political or social issues. The much-vaunted topic of “Purpose” is hardly reflected in the podcasts. Surprising to us, because we believe podcasts offer a brilliant platform to educate stakeholders about corporate values. 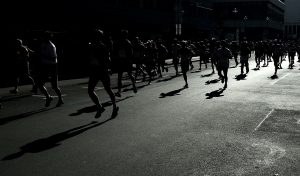 The Power of Purpose

Why is corporate purpose so important? Purpose is about inspiring all stakeholders – investors, employees, customers, etc. – with lasting enthusiasm for the company. 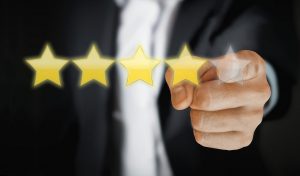 When people speak about you, your company and your products in public, you have automatically created a reputation. Whether your reputation is positiv or negative depends on your doing. 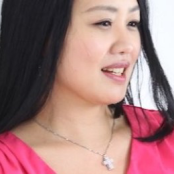 Author: Meena Choi
Meena Choi is a founding partner of Black Dolphin and specialist for reputation management as well as digital branding and social media management. Meena has a BA in journalism from The Ohio State University and a MBA from Schiller University. After working in journalism, Meena held management positions in international communications agencies such as Edelman Worldwide and Incomm Brodeur serving clients such as Samsung, Speechworks and LG. She is a Korean and English native and is working on her German conversational skills.
PrevPreviousBuild A Positiv Reputation!
NextThe Power of PurposeNext